Frank Van Nie reached out to an acquaintance and fellow mental health advocate, Courtney Taylor, and told her, “I’m tired of talk. It’s time for action.” Fully in agreement and also very frustrated that the government wasn’t doing enough to “walk the walk” to improve mental health & addictions care, Courtney and Frank approached 7 other advocates they were friendly with and asked if they were interested in getting Toronto’s first ever MARCH for MENTAL HEALTH off the ground. 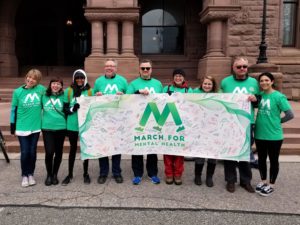 In 8 short weeks, the group quickly put together the MFMHTO. It was a complete “fly by the seat of your pants” operation! Joined by speakers Michael Landsberg, Andrew Jensen, and Lynn Keane, the first March saw about 250 people turn out. Buoyed by the positive response from all who attended, and the sense of community and togetherness, the team planned to continue with the event the following year.

In May 2018, the 2nd annual MFMHTO was held, seeing familiar faces return and new ones attend. The community was expanded when Jack.org joined in the day to shoot a video for a project they were working on. Speakers at the 2nd March included MP Todd Doherty, Zach & Shelley Hofer of Zach Makes Tracks, Maternal Mental Health Advocate Patricia Tomasi, and Jordan Axani & Megan Rafuse of Shift. 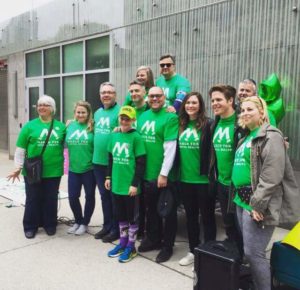 In the fall of 2018, with a desire to propel the annual March to new heights, Frank and Courtney were joined by Jeanette Schepp, Michele Sparling, and Enza Tiberi-Checchia in creating the not-for-profit corporation Voice for Mental Health Collective.

The March for Mental Health will now be the annual benchmark event held under the banner of V4MHC, as they partner with like-minded individuals and organizations to work towards creating a society that understands, accepts, and treats mental illness & addictions in a timely manner.

When we raise our collective voices together, we cannot be ignored.

Join us, and help us improve the landscape of mental health care in Canada.